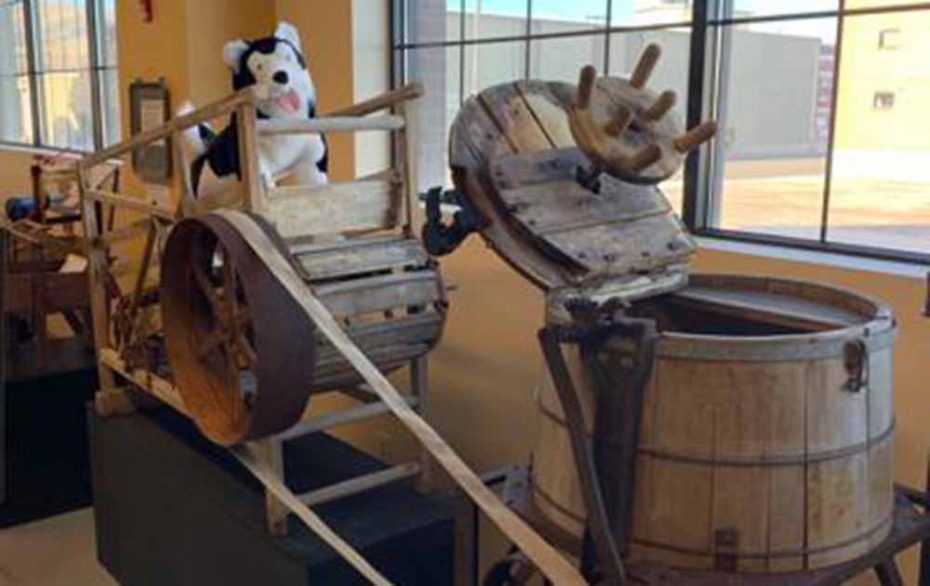 POCATELLO — The Museum of Clean in Pocatello recently added a dog treadmill-powered washing machine from the late 1800s to its growing collection of more than 5,000 cleaning antiques.

The washing machine was a surprise donation to the museum from Mike Verbeck, who found it in an old farmhouse several years ago. The museum received the machine in September and put it on display in early November.

Brad Kisling, the museum’s director, said the machine, which was made through the 1920s, is “extremely rare” and he only knows of two others like it that are still around. The one he now has is in particularly good shape because the woman whose farmhouse it was in likely used it into the ‘70s.

The machine is made of wood and metal and worked by harnessing a dog to it and having that dog walk on the attached treadmill to power the machine.

Based on what he’s been told about this machine, Kisling believes this one found in Howe, Idaho, is still in good condition because it was used even after electricity became common in homes, and specifically in rural homes.

“Once automation came and tractors and automatic washing machines and whatnot, these animal-powered machines would have just been kind of pushed to the side and absorbed into the old farm equipment,” he said. “This kind of thing. especially being made of mostly wood, just wouldn’t have stood the test of time and the weather if it weren’t being used and maintained.”

Kisling said he and the museum’s founder, Don Aslett, were excited when they got the machine because they had had a picture of one and knew exactly what it was upon seeing it. Kevin Gibson, the museum’s mechanical engineer, spent about a month restoring it and then the group staged it with a stuffed dog to help museum-goers imagine its use.

“We were pretty excited about it,” he said. “It takes up a good portion of room in the museum, so it’s not just a minor thing. It’s pretty special.”

The pre-electric clothes washing machine is one of the museum’s many recent acquisitions and donations, including a mobile street sweeper, a 500-vacuum arsenal and a statue known as “The World’s Largest Janitor Big Don.”

The Museum of Clean celebrated its tenth anniversary on Nov. 11 this year, and Kisling said they plan to keep improving and expanding the museum.